Born in Portugal, Ferdinand Magellan took part in a number of Portuguese expeditions exploring and conquering the East Indies during the early 1500s. By 1517, however, he found himself out of favor with King Emanuel and shifted his allegiance to King Charles I of Spain. The Spanish king accepted Magellan’s proposal to lead a voyage westward to the riches of the Spice Islands of present-day Indonesia. 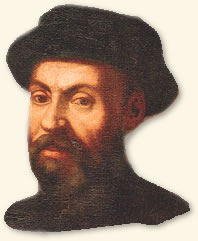 Magellan, from a
contemporary painting

On September 20, 1520, Magellan led a flotilla of five ships with a crew of 250 out of the Spanish port of Sancar de Barrameda. Their goal was to find a water passage around the Americas and continue on to the East Indies. This was a true journey into the unknown – equivalent in adventurous risk to the twentieth century landing on the moon. Contemporary wisdom had no knowledge of what lay beyond the shores of South America and assumed it was a short distance across the Pacific Ocean to the Spice Islands. The journey was long and arduous, punctuated by starvation, disease, mutiny and desertion.

Magellan didn’t live to reach his goal – he lost his life while battling natives on an island in the Philippines. Reduced to two ships, the remainder of his crew pressed on with their mission, successfully reaching the Moluccas – the Spice Islands. Loaded with cloves, the two ships continued homeward. Along the way, the Portuguese captured one vessel reducing the original fleet of five ships to one. Finally, on September 6, 1522, almost exactly three years after its departure, the Victoria with nineteen crew aboard returned to Spain.

Death of the Captain

Our only immediate knowledge of Magellan’s journey comes from the diary of the Italian Antonio Pigafetta. Antonio was not a member of the crew but an adventurous tourist who paid for his passage. In the following excerpt Antonio describes the death of Magellan on an island of the Philippines.

“Searching for a way to control the native population after he leaves the island, Magellan persuades one of the local chiefs to convert to Christianity (referred to by Antonio as the “Christian King”). Magellan hopes to make this chieftain supreme over the remaining local tribes and loyal to the King of Spain. To bolster this chief’s local supremacy, Magellan decides that a show of force, particularly the power of his muskets and cannon, against a neighboring tribe will impress the natives into submission.

Magellan orders an attack but miscalculates. He does not take into account that the reefs along the island’s beach will not allow his ships to get into effective range for their cannon. As the battle is joined along the beach, the Spanish fire their muskets ineffectively from too far a distance despite Magellan’s attempt to order his crew to cease-fire. Emboldened, the natives rush into the water flinging spears at the unprotected legs and feet of the Spanish. The crew abandons Magellan in panic and the Captain is soon overwhelmed:

“When morning came, forty-nine of us leaped into the water up to our thighs, and walked through water for more than two cross-bow flights before we could reach the shore. The boats could not approach nearer because of certain rocks in the water. The other eleven

men remained behind to guard the boats. When we reached land, those men had formed in three divisions to the number of more than one thousand five hundred persons. When they saw us, they charged down upon us with exceeding loud cries, two divisions on our flanks and the other on our front.

When the captain saw that, he formed us into two divisions, and thus did we begin to fight. The musketeers and crossbow-men shot from a distance for about a half-hour, but uselessly; for the shots only passed through the shields which were made of thin wood and the arms [of the bearers]. The captain cried to them, “Cease firing cease firing!” but his order was not at all heeded. When the natives saw that we were shooting our muskets to no purpose, crying out they determined to stand firm, but they redoubled their shouts. When our muskets were discharged, the natives would never stand still, but leaped hither and thither, covering themselves with their shields. They shot so many arrows at us and hurled so many bamboo spears (some of them tipped with iron) at the captain-general, besides pointed stakes hardened with fire, stones, and mud, that we could scarcely defend ourselves.

Seeing that, the captain-general sent some men to burn their houses in order to terrify them. When they saw their houses burning, they were roused to greater fury. Two of our men were killed near the houses, while we burned twenty or thirty houses. So many of them charged down upon us that they shot the captain through the right leg with a poisoned arrow. On that account, he ordered us to retire slowly, but the men took to fight, except six or eight of us who remained with the captain. 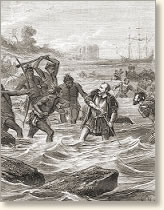 The Death of Magellan, from
a 19th century illustration

The natives shot only at our legs, for the latter were bare; and so many were the spears and stones that they hurled at us, that we could offer no resistance. The mortars in the boats could not aid us as they were too far away.

So we continued to retire for more than a good crossbow flight from the shore always fighting up to our knees in the water. The natives continued to pursue us, and picking up the same spear four or six times, hurled it at us again and again. Recognizing the captain, so many turned upon him that they knocked his helmet off his head twice, but he always stood firmly like a good knight, together with some others. Thus did we fight for more than one hour, refusing to retire farther. An Indian hurled a bamboo spear into the captain’s face, but the latter immediately killed him with his lance, which he left in the Indian’s body. Then, trying to lay hand on sword, he could draw it out but halfway, because he had been wounded in the arm with a bamboo spear. When the natives saw that, they all hurled themselves upon him. One of them wounded him on the left leg with a large cutlass, which resembles a scimitar, only being larger. That caused the captain to fall face downward, when immediately they rushed upon him with iron and bamboo spears and with their cutlasses, until they killed our mirror, our light, our comfort, and our true guide. When they wounded him, he turned back many times to see whether we were all in the boats. Thereupon, beholding him dead, we, wounded, retreated, as best we could, to the boats, which were already pulling off.”

from “The Death of Magellan, 1521,” EyeWitness to History, www.eyewitnesstohistory.com (2001)

You can visit the Nao VICTORIA, a full scale replica of Magellan`s vessel in Punta Arenas – Patagonia – Chile